CEAC is helping Middlebury College’s Sustainability Solution Lab on a project  to survey local residents about their thoughts on home heating in order to understand what it takes for households to reduce energy consumption and switch away from fossil fuels.

CEAC is looking for volunteers to spend up to two full Saturdays in September or October carrying out door-to-door survey work in various towns around Addison County.   The topic of the survey is how people heat their homes, how they would like to change the heating, insulation and tightness of their homes, what barriers they perceive to making the improvements they would like to make, and their views on how long it should take to earn back savings from energy investments.  Survey respondents are anonymous.

The sample for the survey includes 210 single-family homes, and is currently just about half complete.  Each survey takes about a half hour to complete. Surveyors will go in pairs and will typically have groups of seven addresses to go to in close proximity to each other. A team can finish 14 contacts in a day.  Surveyors will need to complete Middlebury College’s on-line human subjects protection training before they go in the field.    Experience so far is that between 60% to 70% of contacted homes agree to an interview.  The main logistical problem the interviewers have had so far is that the people who agree to be interviewed have a lot to say.  To volunteer, please fill in the online form; and/or call Richard Hopkins at  850-544-7614 for more information.

Weatherization and energy efficient appliances are some of the best ways an individual can reduce their energy consumption and greenhouse gas emissions. Unfortunately, the costs and complexity of these projects are a big hurdle for many and the many programs available for support only add to the confusion. The key to weatherization is that you don’t need to know every step in the process, just the right person to call for help. Here are two programs (one for low to moderate incomes, and one for all residents) that are designed to walk you through the complex process of weatherization so you don’t have to be an expert to save money and enjoy a more comfortable home.

Green-Saving Smart is a new program from the Champlain Valley Office of Economic Opportunity that provides financial energy coaching services. These coaches help participants to develop a personalized spending plan, explore savings opportunities, and identify ways to reduce energy usage. They then support you in accessing the resources to achieve these goals with guidance throughout the process. More information about the coaching experience can be found here.

Eligibility: This program is designed to serve any household at or below 80% State Median Family Income (MFI) OR or at or below 120% MFI if you identify as belonging to a Black, Indigenous, Person of Color (BIPOC), New American, or single parent head-of-household.

You can connect with this program in one of two ways:

HEAT Squad is part of the non-profit Neighborworks of Western VT and has been operating in Addison Co. for many years. It is well respected for its client services and the connections it has built with other energy efficiency programs and incentives. HEAT Squad will help to plan and coordinate your project providing energy audits, home and energy loans and incentives, and help to identify contractors to complete the work.

Eligibility: The HEAT Squad is able to serve anyone in the region.

You can connect with this program by:

Don’t know who to contact first? No worries, a quick phone call with either of these programs will tell you who can best serve your family.

Want to share what you’ve learned with your neighbors? Printable materials for both of these programs are available here (HEAT Squad, GreenSavingSmart). Contact Maddison Shropshire (mshropshire@acrpc.org) at the Addison County Regional Planning Commission for help with outreach materials and municipal project support.

The Seminary Street project presents an important opportunity to address affordable housing needs in Middlebury and Addison County in ways that also address climate change by creating an affordable fossil-fuel free housing development.  We welcome the opportunity to work in partnership with the developer to pursue this goal.  Here’s why:

Reaching our state’s and our country’s ambitious goals for reducing or eliminating greenhouse gas emissions requires that we install no new fossil-fuel burning equipment.  This means no fossil-fuel heating devices, no fossil-fuel hot water heaters, and no natural gas stoves.  There are a growing number of developments in Vermont and nationwide that demonstrate this can be done, and prove that this approach does not result in a significantly higher construction cost than a conventional approach, and  actually results in a lower total cost of ownership over the life of the building, a particularly important consideration for an affordable housing project.

We have some specific suggestions. When we consider the opportunity to build a new affordable housing complex from scratch today, here are some of the suggestions that we hope are seriously considered.

If we are committed as a community to environmental justice, building green affordable housing along the lines we have suggested above is one concrete way that we can demonstrate our commitment to this principle. 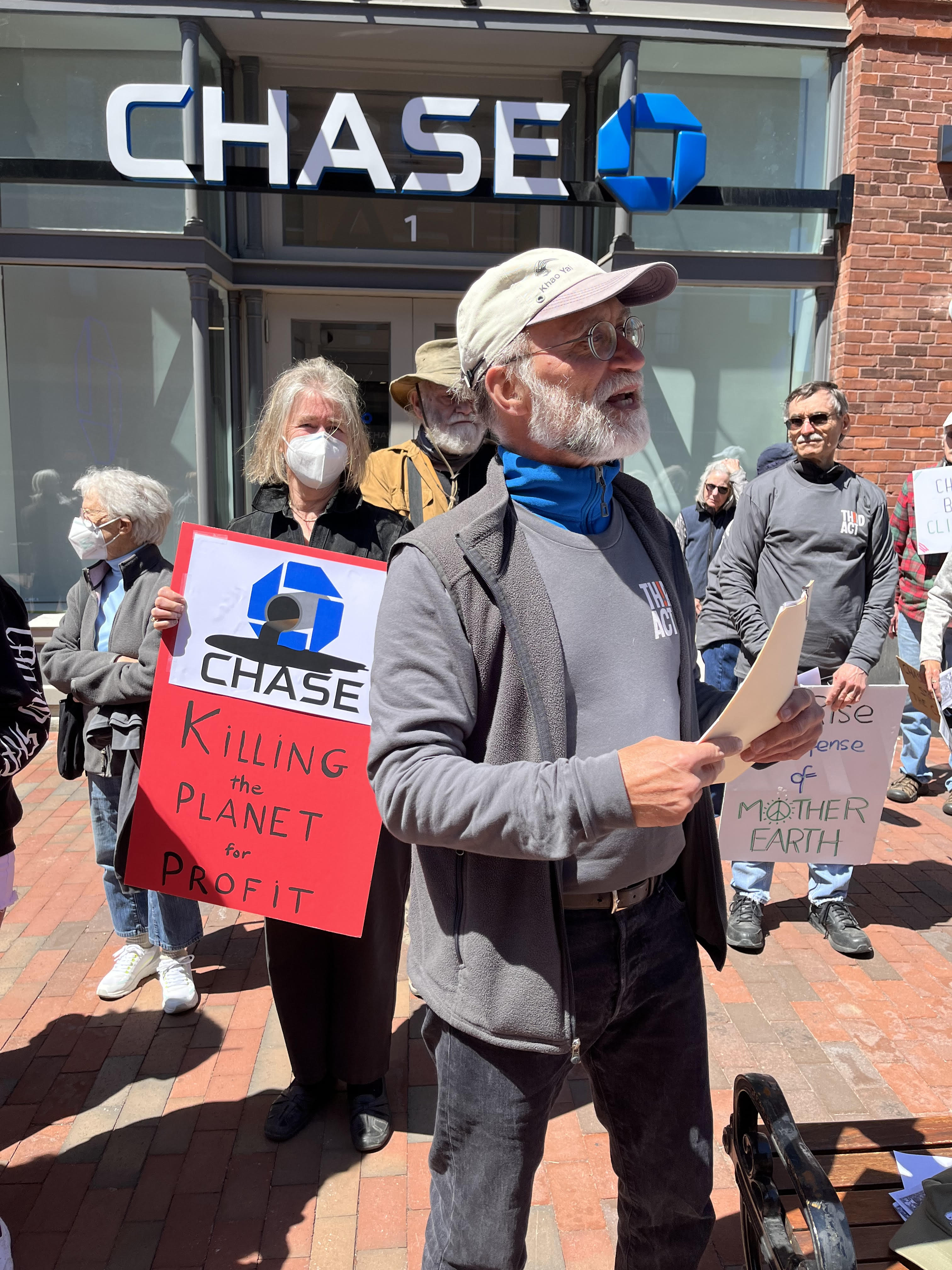 Third Act is a new national organization co-founded by longtime CEAC supporter Bill McKibben, who lives in Ripton. The rapidly growing group organizes elders to focus on climate change and voting rights — a proud organization of “fossils against fossil fuels.”

This first-ever climate protest by Third Act Vermont elders highlighted the bank’s role in fueling climate chaos by continuing to finance new coal, oil and gas projects around the world.

“Chase investments fuel a climate emergency that is affecting Vermont more than most states. We now have higher-than-average temperatures — witness near-record heat this May — and greater, more destructive levels of precipitation,” said Sudbury resident Ross Eisenbrey, an organizer of the protest.

“Chase’s way of doing business threatens Vermont farms, traditional businesses such as maple sugaring, and the future of those who will inherit the crisis when we elders pass on.”

Among the event organizers were Greg Dennis, a founding board member of CEAC,  and Weybridge resident Fran Putnam.

“Elders offer a unique voice against climate change,” Putnam said. “We have a direct stake in slowing global warming to protect the planet, our children, our grandchildren and our financial investments.”

Mike Pieciak, a Democrat running for state treasurer, briefly visited the event while campaigning nearby. He told organizers he supports working with pensioners and the state pension funds to eliminate fossil fuel investments from the Vermont portfolio. UVM, the state of Maine and many other institutions have committed to divestment, but Vermont so far has not. 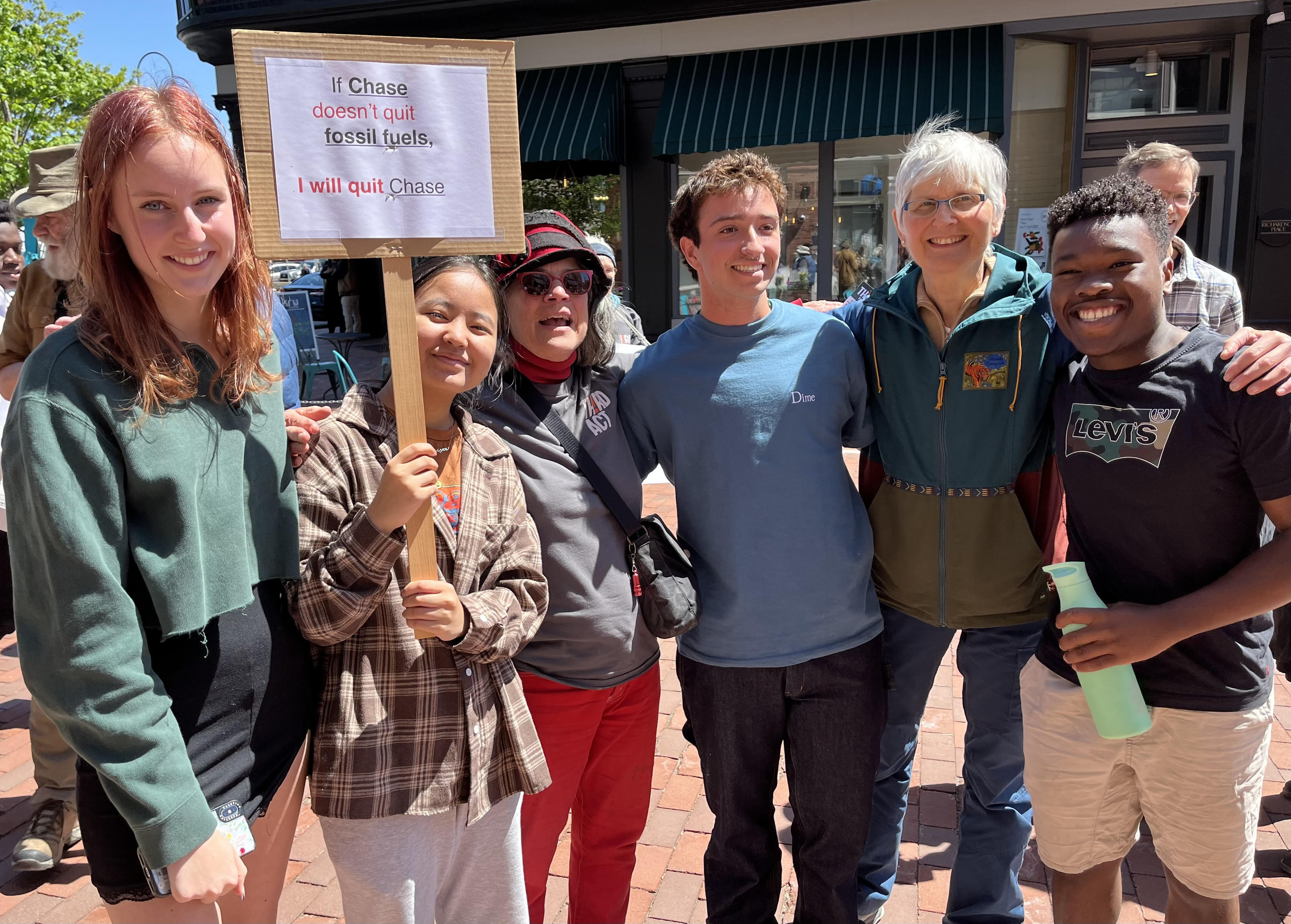 A group of Burlington High School students also dropped by the event as part of the school’s City & Lake Semester — making the gathering one of both high school seniors and senior citizens.

A letter delivered to the Chase bank manager stated that if Chase does not stop funding new climate-wrecking projects by the end of 2022, Third Act Vermont will join with thousands of customers “and close our checking, savings, and credit card accounts” with the bank.

You can get more info about the national campaign and climate pledge here: https://bit.ly/3MlpQuj.

This Burlington action was one of many held and planned around the U.S. at four banks (Chase, Wells Fargo, Bank of America and Citi) that are the world’s biggest bank funders of climate-busting coal, oil and gas projects.

This is your very first post. Click the Edit link to modify or delete it, or start a new post. If you like, use this post to tell readers why you started this blog and what you plan to do with it.

To learn more about the program, please send an email to office@ceacac.org.